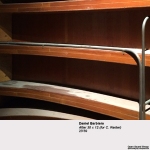 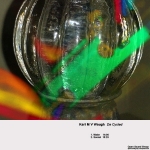 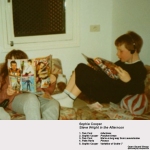 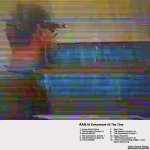 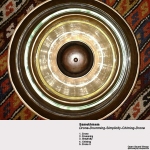 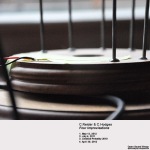 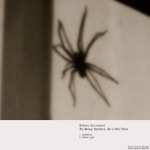 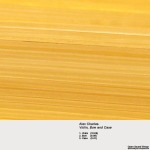 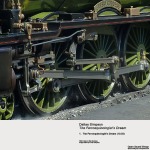 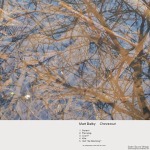 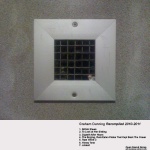 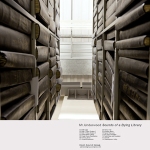 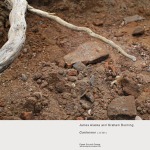 Between 2010 and 2014 there have been six OSG events and 34 netlabel releases. Many thanks to everyone who’s shared their music, participated in the workshops and recordings and listened to the output. I’ve now decided to shut up shop to concentrate on other projects. You can find out more about those here: grahamdunning.com

Looking back over all the great sound and music we’ve made has made me really proud. Please have a browse through the back catalogue and listen to some of the magical sounds, here. Many thanks of course to Archive.org for the hosting. I might put out the occasional thing in future, if it fits, but for now, Open Sound Group is CLOSED. 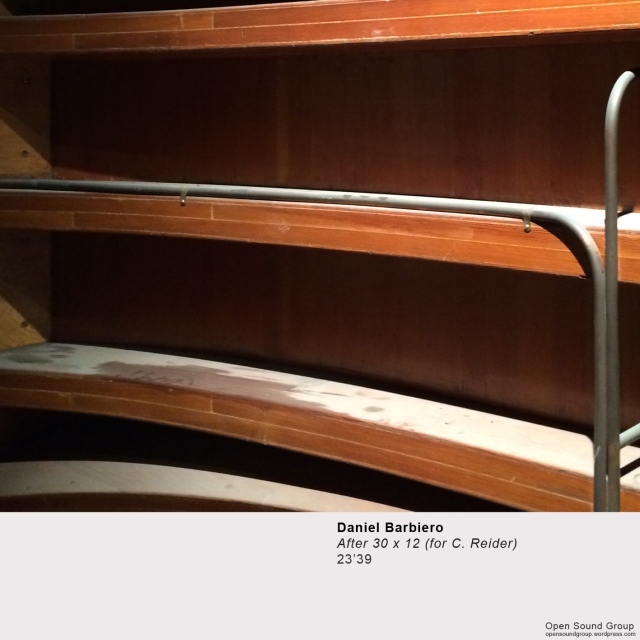 After 30 x 12 (for C. Reider) by Daniel Barbiero is a gestural composition for double bass and optional electronics. Individual gestures were drawn from a closed vocabulary of actions to be taken in relation to the sound material, and then organized as discrete events. These events were then arranged sequentially into long-period phrases separated by non-actions. C. Reider contributed a layer of electronics based on a reduction of a live performance using the double bass sounds as a filter.

“I have been making my own music since 2008. Most of my music now revolves around tape which I have found to be a flexible and expressive tool. I created the pieces using 2 old cassette players with tapes along with a few pedals and a synth. The initial recordings of long improvisations were then edited down or rearranged.”

Kevin Logan
My practice explores the sonic through gesture and performance. In particular low-key and low-fi sequences of performed tasks, re-constructed, re-purposed and ‘re-punked’ through secondary technology, bringing into question the authenticity of their first instantiation.
http://mediatedsonority.co.uk
http://theearoftheduck.wordpress.com
http://secondary-gestures.eu
http://thickear.org

Paul Eggblood
i am a mixed media artist working in sound mainly, but also visual art such as video and photography. i also write and have performed spoken work stuff. I am a dj spanning 20 odd years and use vinyl, flexidiscs and all sorts of other bits a lot.
http://mouthinfoot.net
http://soundcloud.com/eggblood

Leslie Deere
Originally from Tennessee, I am a London based artist working with a variety of media. My background is in the performing arts as a classically trained dancer. I have a BA Honours degree in Sonic Art and hold a Masters Degree in Communication Art & Design from the Royal College of Art.
http://www.lesliedeere.com
http://www.lesliedeere.com/audio/sound-compositions

Charlotte Hailey-Watts (CHW)
is a practicing experimental artist in a variety of mediums- mainly installation, mixed media and actions. She is largely self-taught, apart from in Photography, which she studied for several years before dropping out. She was a keen musician until arthritis forced her to stop playing violin, saxophone and guitar and is fairly new to music production and sound art as a way to re-invigorate a form of music practice. She has worked in arts and mental health over the past couple of years and currently runs therapeutic sessions in two psychiatric units. This work overlaps with key interests in her personal practice with the uncomfortable and unspoken and art as catharsis for maker and, potentially, viewer. Spontaneous and improvisational practice and collaboration (NOT participation) are also areas of pursuit.
Soundcloud: https://soundcloud.com/charlotte-hailey-watts
Twitter: @CHW_art

Lara Pearl
I am curating music, sound.art events and lecturer in digital arts – sound performance
some of my events here :
https://www.facebook.com/events/535691876517779/
http://lauraplanagracia.blogspot.co.uk/2013/06/soundart-event.html

Stuart Tait
Stuart Tait has practiced mainly as a collaborative artist since graduating in 2000. His main practice has been as part of the collective AAS. AAS has a central group of four artists who administrate the group, but includes other artists who become part of AAS on a project-by-project basis. It is both a collaborative group and a mutating, experimental artwork in its own right. He has also been part of several other less formal collaborations, including with Plastique Fantastique, Parfyme, Henrik Schrat, and Calum F Kerr. He is also part of Reactor and audio collectives Samekhmem, Insectoid, and Milgram as well as being a former member of the Zero Point Collaboration, and the Red Line Group. His practice-based Ph.D., ‘Becoming Multiple: Collaboration in Contemporary Art Practice’ (2009), studied historical avant-gardes as varieties of collaborative formation and drew comparison with contemporary practices. The thesis drew on concepts from continental philosophy and sociology to develop the new concept of ‘molecular collaboration’.
http://stuarttait.com

Open Sound Group events give participants the opportunity to share ideas; talk about and demonstrate their practices and methods; form potential collaborative connections; and create sounds and record together. While the format of the day is open and flexible, one expected outcome is a series of recordings which will be released through the Open Sound Group netlabel. The event will take place at UNIT3 in Dalston, East London.

The event is open to artists, musicians, composers and performers from any background. The one restriction specific to this event is that the focus is on using records, turntables or gramophones somewhere in the creative process. There will be some turntables available on the day but it would be useful for participants to bring their own equipment also.

The workshop is free to attend but places are limited.
To apply please send the following to gndunning@gmail.com
– A couple of lines about your working practice;
– One weblink to your site or blog;
– One link to some online sound (soundcloud/youtube etc).
Please note: for successful applicants, these will be shared on the OSG blog.
Deadline: Monday 18th November 2013. 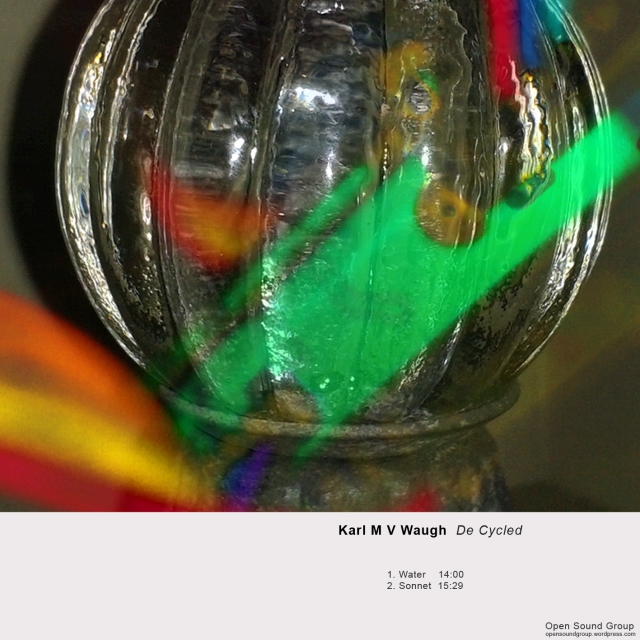 Two scraps from the cutting room floor that found each other and fell in love. Ambient drone and harsh noise.

Karl M V Waugh is an experimental musician with interests in free improvisation, drone, noise, field recordings and ambient music. Having recorded and performed with The A Band, The Zero Map, Binnsclagg as well as numerous short collaborations his solo work focuses on the concept of long form pieces, tones as a paint, the imperceptible. He has a Doctorate in Mathematics, plays violin, guitar, electronics, writes poetry, paints abstract painting and works as a software engineer.

This early 2013 offering from the Open Sound Group is, just as its title rather modestly states, four improvisations by sound artists C. Reider and C. Hodges, performed and recorded at various dates between 2010 and 2012. Throughout, Reider and Hodges employ various combinations of electronic and acoustic sound sources to produce soundscapes of a starkly intriguing beauty.

The first track is an entrancing twenty-four minute improvisation of metal (Hodges) and metal and electronics (Reider). Beginning with the shimmer of echoing metallic sounds, it unfolds into washes of electronic tones spreading out in long cycles. As the piece develops, long and short cycles of sound—grounded in echoes and drones—phase in and out. At the heart of it all are the sonic properties of metal as it is struck, scraped and rubbed. Reider and Hodges leave stretches of space between the…

An album of recordings from Sophie Cooper’s tape archive, edited into the format of a radio show presented by her then seven-year-old brother. Through the tape hiss comes drone, pop, noise and instrumental guitar compositions.

Release: AAS – All Everywhere All The Time 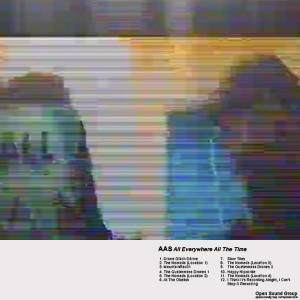 The letters AAS do not stand for anything: they should be pronounced as a word. There is a core group of artists, but they are not AAS. One becomes part of AAS during a project. AAS is a self-producing artwork, creating itself through performance fictions and collective consciousness. These recordings span an indeterminate spacetime. [more info]

Free Download
Comes with a choice of five different covers, shown above.